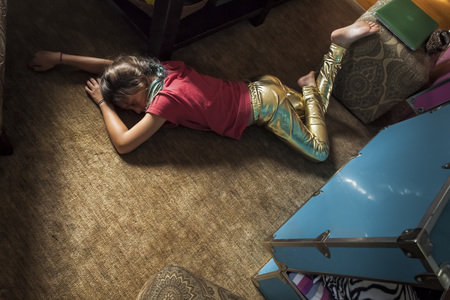 Curator Julie Williams-Krishnan,
www.jwkphotography.comsays, "No More Braids, by Tira Khan, shows a quiet adolescent moment after some sort of event worth dressing for.The energy of the celebration is hovering, but has been spent. We can see that there must have been a great deal of dancing in those golden leggings! I think we can all relate to that moment after our big day, when the friends have all gone home, and we are content to rest, satisfied it has been a good day.

No More Braids is beautifully shot. The composition gives the viewer space to linger on the details - the computer by the pointing toes, the animal-print cuff, the blue and mauve open trunks - indicating what? The packing up of times gone by? Dress-up clothes for a party?

The angles of the body and the furniture and the trunks all direct our gaze, and the open space with the light on the carpet gives us time to consider this domestic moment. The colors in this image are beautiful. In the midst of the muted living room -  brown, mauve, deep green, pale blue/teal - there lies this beautiful child in shimmering golden leggings, a bright red shirt, and, a pale blue/teal braid. She is not sleeping.

The irony of the title is not lost. The braid is resting, just like the girl. Perhaps it is contemplating its future.

This call for entry was about vibrance - what is it about this image (and the series) that speaks to vibrance for you?"

Tira Khan says, "My series, Growing Up Girl, focuses on my daughters.
In the winning photograph I think the vibrance comes from my daughter’s energy as well as the colors associated with youth. I wonder what possessed me to paint her room that jolt of green? My daughter’s shirt is neon pink, which complements the walls in a jarring way.

She exudes determination and as she brushes her hair — I find there is nothing softly romantic about it. It looks like she has places to go."

Curator Julie Williams-Krishnan says, "Where do you find your inspiration?"

Tira Khan says, "I tend to find inspiration in what is around me — often because that is what I have access to. I enjoy exploring the everyday lives of teenagers, my own and others.

I admire their rawness before they become too entangled in social media and cultural norms."

Curator Julie Williams-Krishnan says, "What do you dream of photographing?"

Tira Khan says, "I would love to photograph the lives of other teenagers in an essay for a newspaper or magazine. I am also learning how to create studio portraits, which is something I’ve never done before. Usually, I tend to photograph subjects unposed in environmental portraits, but I thought it might be fun to explore portraits with subjects who actually don’t mind me photographing them."

Additional review by curator Ellen Wallenstein:
"What could be more vibrant than gold lame pants?

And a bright red teeshirt!
I enjoy this photo for it's exuberance and the way one slides into it visually from the lower right corner. From that turquoise trunk and onto the floor, not unceremoniously.

It was smart to shoot this from above. The empty space of the rug, filled with light is a perfect balance to the full use of the top and right sides of the frame. The details that make this image work are the reflections of the trunk and computer on the girl's pants. And of course the grown-out pastel ends of the eponymous braid."
www.ellenwallenstein.com

Addition review by curator Fran Forman:
"Curator Julie Williams-Krishnan’s choice of No More Braids as the first place winner is spot-on! This image, by Tira Kahn, appears quiet and unassuming at first glance, but opens up one’s senses and curiosity almost immediately.

The colors are tantalizing: the blue and green reflected in the child’s gold pants and hair, and the little rectangle of purple disappearing on the far right, the triangle of orange behind the green laptop, and the red shirt front and center…amazing.

The child’s position (is she asleep? posing? exhausted?) replicates the diagonals and triangles of the composition.

At first glance, the image feels slightly disorienting, but the placement of the figures and the precision of the geometric ‘dance’ suggest harmony and perfection. Bravo, Tira Kahn! - fran
www.franforman.com
Tira Khan says about her series, "Growing Up Girl', "I began photographing my three daughters because I wanted a portrait to hang on my living room wall. I envisioned them freshly bathed, dressed and happy, all at the same time. For me, that was an impossible trifecta. Instead, I began to photograph moments more authentic -- when my girls were wrapped in their own thoughts, oblivious to me.

Over the years, people would encourage me to photograph something more important, something that mattered to the external world. But I found myself drawn to these moments when my daughters were introspective — perhaps I thought taking their photo would lead me closer to their inner world. Children and adolescents have a seriousness about them that we, as a culture, sometimes forget. I paid attention when not much was “going on.”
As the girls aged, I realized that these small moments added up to something much larger — the development of character, personality. Now, as I feel more confident, they are more confident too. We see each other head-on, unapologetic in our flaws. But we are also, at times, more wary. I hope these small moments — witnessed in these photos — show personal growth, enabling them to interact with the world beyond home and family.

As Susan Sontag says: “Photographs are really experiences captured.” I feel like these photos captured early family life and who they have become. The childhood “magic” has morphed into teen melodrama and more. It’s now a different kind of energy. We grew up together."
Tira Khan’s photographs focus on people, family and unguarded moments. She enjoys photographing people in settings where they feel most comfortable — often their homes and places of work. She is also interested in the temporal — how the past relates to the present, and the passage of time.

Her photographs have been published in the New York Times Lens Bog, The Wall Street Journal, and Bloomberg Businessweek.

She has published work in two books: We Who March, a book on the 2017 Women’s March, and Family. Life., organized through the Alexia Foundation & Syracuse University's S.I. Newhouse School of Pulbic Communications.

She has exhibited in solo and group shows, including the Danforth Art Museum, Griffin Museum and Soho Photo Gallery. She was recently selected by Christopher Rauschenberg as one of eleven photographers in Exposure: The 22nd Annual PRC Juried Exhibition.

Her portfolio, Growing Up Girl, is part of a traveling exhibit, Outspoken, which explores the idea of women and girls in American culture.
www.tirakhan.com