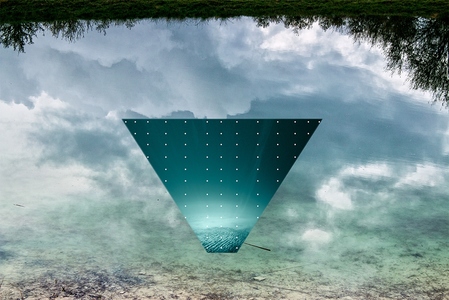 Curator Ellen Jantzen says, "I chose Chelle Delaney’s “Ascension” as the first place-winning image. There is a mystery here that I find intriguing. I like the formal nature of the truncated triangle with graphically space dots forming a grid in conjunction with the unexpected natural elements of undersea, clouds and an inverted shoreline.

There is an intrusion of the hard-edged shape into the soft ethereal world that I find enticing. I am not sure if this was intentional, but I sense an oar of sorts propelling the graphic form through natural world.
:
I am always drawn to titles and have my own interpretation of “Ascension”, but could you elaborate on yours?"

Chelle Delaney says, "Ascension is the act or process of rising beyond the earth. We usually think of a star drifting up beyond the horizon to the summit of the evening sky, or the Christian concept of Jesus' ascent into heaven. But ascension is both an act and part of endless process, like the upward flow of evaporation—molecules of water and earth (the primordial soup) rising from the pond where we see the sky’s reflection. As the elemental particles of life move between earth and the heavens, we humans aspire to ascend to live beyond our reflections, in other ways, in other forms and layers, up and throughout the universe."

Jantzen says, "I love the upside-down land form; it adds a mystery to this piece. Can you speak a bit to your decision to include this?"

Delaney says, "These are actually cloud furrows, taken from an airplane, but they serendipitously lend themselves to a symbolic nourishing land form to create another layer of life that lives and grows in our skies, and up and throughout the universe."

Jantzen says, "Does the truncated triangle have a specific meaning in this piece?"

Delaney says, "It just seemed to me that the kind of ascension I imagine requires a larger portal than the narrow opening of the inverted apex of triangle."
Additional review by curator Fran Forman:
"I can imagine that selecting a first-place winner for the theme “Unexpected” must have been daunting indeed. Just about everything in life can fall into the category unexpected! But Ellen has selected a wonderful image, and I particularly enjoy the graphic quality, the symmetry, and the almost monochromatic palette. The dots within the triangle are a particularly elegant touch Congratulations to Chelle Delaney!"
http://www.franforman.com

------------------------------------------------
Chelle Delaney says, "In the memory of humans, the triangle is a primal form. The shape of mountains, valleys, canyons was imprinted in our first consciousness, and still reminds us of the powerful deep forces within the earth that created them and us. These images explore the sources of this form in the geological, vegetal and human world and the intersection of shape and mythological, spiritual and contemporary
forces."
Chelle Delaney graduated from the University of South Carolina, where she studied English Literature. She later studied photography at the School of Visual Arts and the Southwest School of Arts in San Antonio, Texas.
Contact
caridela@gmail.com
THE UNEXPECTED HOME PAGE:
http://nyphotocurator.com/the-unexpected-ellen-jantzen