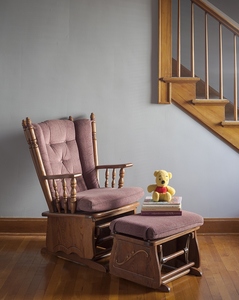 Review by Curator Susan Spiritus:
Crystal Tursich’s photograph, “Things We've Saved” has a bare emptiness to it, but it brought me back time and again. Although we only see a small part of a room, we are left to question things about the house. Have they moved out or are they moving in? I chose to believe the former.
It appears empty – the people have moved out – or moved on and its starkness was evident to me. Was the photographer the child who played with the bear? Is the photographer the daughter whose parent sat in that chair? While the photo does not give us many answers it is one I returned to several times to think about – but still did not get my questions answered. It left me thinking that the journey began years ago in this house with a child whose favorite toy was the stuffed Pooh bear and the books were his/her favorites that were read on a daily basis…. by whom? I think it was the grandparent’s home for many years and the grandchild made frequent visits. It was probably the ‘favorite’ chair and was used everyday and each time stories were read. Surely a photograph of this arrangement is a way to remember the past – the journey."

Crystal Tursich says, "In Silence is a series of photographs that visualize loss and the looming emotions following such an experience. As I heal both physically and mentally, I have turned to my camera to construct and document the moments, object, and feelings that connect me to my loss. The resulting images serve as artifacts, creating a visual archive of my experience and the accompanied complex emotions that cannot be articulated through words alone."

Recently, she has been included in group exhibitions in Cincinnati, Minneapolis and Louisville. As a plastic camera and film photography enthusiast, she is pleased to have been included in both the Somerville Toy Camera Festival and Soho Photo Gallery's Krappy Kamera Exhibition.

Last year, Tursich participated in a collaborative project with six other women that was shown in Columbus and Peoria.

She was also invited to create site specific work for the Franklin Park Conservatory with others who attended or taught in the Photography Department at CCAD.

Crystal Tursich lives in Columbus, Ohio and serves as an Upper School Art Teacher at Columbus Academy specializing in photography.