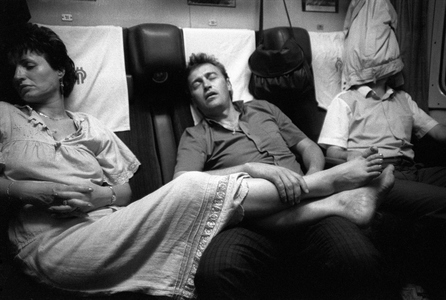 Review by curator Susan Spiritus
www.susanspiritusgallery.com "There wasn’t a better single image that was submitted to the “JOURNEY” competition that expressed the overall theme than this photograph by Sylvia de Swaan!

The three exhausted people riding together in the train cabin, asleep and obviously unaware that their picture was being taken, perhaps by a stranger, or maybe not. It is clear that they have been asleep for quite some time – their journey being a long one with much travel ahead. It is also apparent to me that these people are sharing the car; a second-class cabin with several others and each has a limited amount of personal space.

While I am not sure of the relationship of the couple – husband/wife or mother/son; it is clear that they are sharing their space together, while the person on the end with his coat over his head wants to shut out everything around him and have his space to himself. It is obvious that they are all in for the long haul journey ahead."

Spiritus asks Sylvia de Swaan, "I’m so curious about the entire setting for the photograph:  What was your relationship to the occupants in the car? Were they total strangers or were you traveling with them? Time of day/night? Why did you choose to photograph sleeping people? Were they aware (after the fact) that you took this picture?"

Sylvia de Swaan says of 'Baltic Express', "It was taken May 23/24th on an eighteen hour train  journey on the Baltic Express, A route that starts in Bucharest and meanders up through Romania, Hungary, Czechoslovakia, with a final destination at Bahnhof Lichtenberg in Berlin. I got on at Nyugati station in Budapest and took my seat (#53), in a compartment with five other passengers.

Three of them were Dresdeners, elderly parents with their grown son, who had been on their first venture out of their country in 37 years.

The other two, Hungarians; an attractive couple with a faint air of mystery and elicit romance about them. I was travelling alone, the first of my extended journeys to explore the terrain of my early childhood as a survivor of the Holocaust and refugee from war.

I chatted with the Hungarians in English and with the Germans auf Deutsch, telling them that I'm an American Photographer doing a story about train travel in Eastern Europe (a half truth) and asked if they wouldn't mind if a took a few photos of them in the course of this journey.

They all seemed amenable to the idea and so I took some photos of them awake, but was especially taken by the scene before me late in the night when the Hungarians were all asleep.

Naturally I didn't see the full impact of the photos until after I was home and I'd developed the film.

Earlier on 19 of May I witnessed the amazing turnout in Prague to the speech given by Vaclav Havel in Vencelav Square & many other scenes."

Additional review by curator Ellen Wallenstein: "This photo is nostalgic for anyone who has ever ridden a train through Europe at night, in a compartment full of strangers. The late night/early morning is timeless in all senses of the word. The use of black & white makes it a throwback to memory of train travels, and early Hitchcock movies.

Watching a sleeping intimacy: Strangers On A Train. A man and a woman interconnected by their touch.
What time is it? Are they seated moving backwards, or forwards? On the right a man is sleeping under his jacket, a non-onlooker whose presence completes the rule of thirds.

We are on the Baltic Express,somewhere in the late 20th century. As i see it i can feel it - the closeness of the cabin, his hands on her legs: summer sleep, bare feet.
As i see it i can hear it- the quiet breathing of the woman; his snores; the understated clickety-clack of wheels beneath.

A journey to the past through the present as photography stops time. Bravo, Sylvia."
www.ellenwallenstein.com

Additional review by curator Wendi Schneider: "There is a poignancy in the vulnerability that emanates from this image and gives me pause. It triggers reminders of that which we cannot control, and also of the intimacy that can develop quickly in close quarters or even from afar."
www.wendischneider.com

Sylvia de Swaan says, "I'm a fine art and documentary photographer who works on long term self assigned projects that explore personal and collective memory and identity, the state of the world and the places where I have lived.

The three pieces submitted to this compeition are from a body of work titled "Return:The Landscape of Memory" that are about my travels in post communist Eastern Europe to retrace the routes that my mother, sister and I traversed as stateless refugees at the end of the Second World War.

Since there was nothing before me of the pre war stories my mother told and little of the scenes that I experiences in my childhood, the question I asked myself was, how does one photograph an absence? I therefore brought with me a few family photos and other artifacts to mark my connection to the lands of my ancestry.

I was born in Romania and immigrated to the United States when I was nine years old. The highlights of my life and career have been that at age 16 I was accepted to the High School of Music & Art, where I received my first training as an artist, that in my junior year in college I decided to go on a six month visa to Mexico, where I ended up living for eleven years; met a group of remarkable people and gained much recognition for my work, which at the time consisted of paintings, artist books and installations; that I had the good fortune to be invited to apprentice with the photographer Rodrigo Moya and that eventually photoraphy became my primary medium.

My work of the past twenty years have earned me, among others, four NYFA Fellowships; three travel grants from ArtsLink; residencies at Light Work, Bemis Center for Contmporary Art; Anderson Ranch Art Center, as well as fellowships from Art Matters, the Aaron Sikind Foundation, among others."