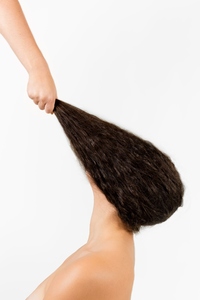 Her work investigates the actions that live in the liminal space between what is controllable and uncontrollable, enjoyable and unpleasant, funny and serious.

Drawing from conceptualism, feminism, and body culture, she uses her own body to create narratives that examine human’s capability to cope with systems of power.

These narratives speak to the importance of the cycle of growth, knowledge, physical and mental strength, that battle the constant struggle of the women, LGBTQ, and POC experience throughout their lives.

Drifting away from the sexual and sexualized femme fatale, she shares her experiences to contemplate histories of representation, inner battles, insecurities, and the acts to overcome them.

Alicia Rodriguez Alvisa is a Cuban visual artist currently based in Boston, MA.

Alicia received her BFA at The School of The Museum of Fine Arts at Tufts University on May 2018.

She is the recipient of the Springborn Fellowship and The Yousuf Karsh Prize in Photography in 2017.

Her photography work has been exhibited throughout the Boston area at AREA Gallery, Bromfield Gallery and three consecutive Medal Award Galas at the MFA, Boston; and internationally in Sanlang Art Dimension China, The Auckland Festival of Photography, New Zealand and in her home country Cuba as part of the Biennale of Havana in 2016. She has performed at the Museum of Fine Arts, Boston, MA, Gallery Kayafas Boston, MA and The University of Ohio.

Her on-going performances & public interventions include her series of performances I Can Look Strong, I am Strong, in which she becomes “Strong Arm”, a genderless bodybuilder who talks about issues of gender, identity, and race in the contemporary art world while lifting weights and wearing high heels.

Pulling is a series that depicts women, as a strong and powerful center. It represents women as a monument, breaking away from how we perceive the female body. An unsexualized depiction, that gives importance to a woman’s cycle of growth, knowledge, strength and struggle. 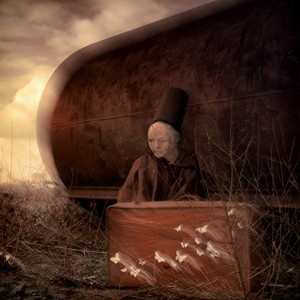 Daniel Munteanu says, "I believe portraiture can deal with more than the standard of the real world characters and faces.

Using intentional camera movement technique (ICM) and staged photography I wanted to depict fantasy characters out of a personal dream and give out the feeling of a surreal dream.

The portraits from the series have masks, props (wings, other implements) and clothes made in-house, by the photographer, and are staged in carefully picked natural spots or specific places to obtain different moods.

One of the defining things that place a photograph as being an artifact depicting a slice of reality, a copy of reality in a way, is the clarity of the lines and all the details that resemble the thing actually photographed. I wanted something different but sincerely straight from the camera.My goal was to photograph reality in a way that it no longer looks real, palpable, but more like we are made of mist, particles or light waves. A photograph that depicts reality in an unreal way."

For the last five years working at the Transience impressionist project, travelling in different cities and natural settings in Europe, experimenting and shooting more than 80.000 images for this project alone, with the goal of turning photographed reality into fantastical paintings. 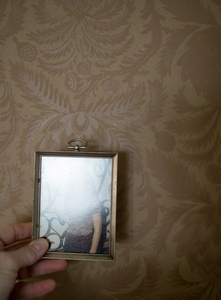 Jo Ann Chaus is from and based in the New York area with a background in fashion, interested in color image making that is layered, provocative, ambiguous and psychological in nature.

In 2017 she self-published a monograph,  Sweetie & Hansom, a seven-year project exploring her relationship with her family of origin, the premature death of her younger brother, and the effect of that sudden loss.

As a natural transition, she is currently editing a completed body of work to become a second monograph relating to identity as an individual and as a woman that looks at her relationships with herself, as a girl/child/adult, woman, wife and mother, and the demands and expectations imposed on women of her generation.

The work is performative, drawing on relationships with women known and unknown, past and present.

Jo Ann is an alumni of two one-year Evening/Track programs at The International Center of Photography (ICP) in New York (2013 and 2017).  She continues to question the status quo in and around her as it relates to identity and relationships with herself and others.

IF VIEWING ON PHONE SCROLL DOWN. 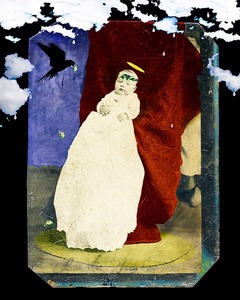 Leslie Sheryll says of her series, 'Mourning Tears', "In this series, I combine the sometimes harsh reality of post mortem tintypes with symbolism used in posthumous paintings of the same era.

Recording the dead as a treasured remembrance was common practice in the 19th century and was not considered morbid. Mortality rates were high especially among mothers and children; it was common for babies to remain unnamed until after their first year of life. Death was an intimate experience which took place at home. Preparation was often carried out by women, who embraced death as a fact of life. It was a custom for the rich to hire an artist to paint the deceased. The artist would incorporate symbolic meaning into the painting to help ease the sadness of those left behind. The invention of the tintype, in the mid 1800’s, was a new inexpensive photographic process which allowed people of all classes to have a loved ones image recorded. This was often the only visual documentation of the deceased.

Post mortem tintypes could be a harsh, signs of illness or rigor mortis may be apparent. Sometimes eyes were either forced open or painted onto closed lids. The practice of propping the deceased in a chair or even standing, wearing their best clothes was common. As was photographing the deceased among family members.  In these images I try to soften these postmortem tintypes by added flowers, color, fabric, objects and scenes, the same symbolism used by the posthumous painters of that era.

There is always sadness with death and the tears incorporated in each image pay tribute to both the deceased and the ones left behind.

I Grew up in the Riverdale section of the Bronx, spent my post college years in Manhattan and have been living in Jersey City since 2000. My interest in photography began at the High School of Art and Design but was I also influenced by my grandfather who was an amateur photographer and filmmaker.

I received a BFA from Kansas City Art Institute. For the last eight years I have been exploring female identity by appropriating and digitally manipulating 19th century tintypes of women.These tintypes are my starting point in creating a new narrative combining historical references with personal and current issues that resonates with women today.

The 19th century brings together several forces. The belief in Darwinism reinforced the belief that men were the superior sex. The roles of men and women were strictly separated into what was called “Separate Spheres". A woman's sphere was at home as wife and mother. The 19th century was also the advent of the tintype. Now all classes and not just the rich could have their images recorded.  Finally, this was also the beginning of the women's suffrage movement.

Women were increasingly becoming discontent with their restricted lives. It was time to fight for their rights.

Most recently my work has been shown at the Davis Orton Gallery in Hudson, N.Y., The Center for Fine Art Photography (upcoming)in Fort Collins,Co. and The World Through My Eyes, Galeria Valid Foto, Barcelona, Spain.

I have won the Julia Margaret Cameron Award for Women Photographers in 2018, 2017, 2016 and 2015 in various categories. Some on-line publications that have shown my work are Float Magazine, L’Oeil de la Photographie and Underexposed Magazine." 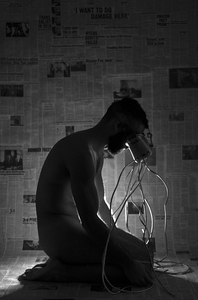 Clay Burch says, "When approaching my photographic work, my mission is to capture a scene that is rarely, if ever, experienced by the viewer and present it in an approachable way.

I have succeeded if the viewer can relate to a scene or find beauty in situation that typically might not invoke thoughts of beauty.

I start with the fundamentals of photography: light, color, and composition. Often creating my own handmade lighting equipment and color gels, I strive to use atypical sources of light to paint a more dynamic and interesting image. Much of my photographic work revolves around the portrait as I am interested in the human experience; specifically the experience of the queer male and their place in society.

As a queer man who migrated to an urban environment, I seek to tell my own story through photography by referencing the stories of those who came before me and made my work possible."

Clay Burch, born in 1987 in Dallas, TX, is a New York City based artist specializing in digital photography. A graduate of Oklahoma City Univeristy’s BFA Acting program, he moved to NYC to pursue a career as a classical actor and found his creative voice in the camera.

He takes inspiration from literature, queer history and culture, and photography masters such as Sherman, Mapplethorpe, and DeSana.

His work has been seen at Midoma Gallery in New York City and Visual AIDS: Postcards from the Edge.

Image: "Radio of Hypnotism 7078-2018. From a series entitled, 'Leaving No Broken Hearts' and inspired by Allen Ginsberg's 'Howl'. The series is an exploration of Ginsberg's original themes: sexuality, drug use, isolation, and American Capitalism, from a modern perspective. His controversial work resonates in today's socio-political climate and this series of photos seeks to expound and expand upon Ginsberg's narrative and highlight it's relevance in modern American society." 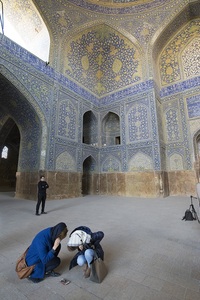 Howard Rotblat-Walker says, "My work is inspired by an appreciation of abstract art, architecture, Italian design, the Japanese visual aesthetic, and work in other artistic media, both classical and contemporary.

My particular artistic interest is creating abstractions – including ones visualized in my imagination. The images I exhibit are primarily photographic abstractions that span years of looking, and seeing something different, unique, and visually compelling by using the interplay of forms, patterns, color, and texture."

HOWARD ROTBLAT-WALKER, a native of Chicago, moved to New England in the early 1970s. He has also lived and worked in Canada and did research for his Ph.D. in Iran.

As a frequent traveler who is drawn to explore and investigate, many of the imagesHoward has exhibited are from these experiences. Location, however, is less important than the visual qualities Howard seeks to capture.

Howard’s photography is auto-didactic. His interest in photography as art began in the late 1960s, but has only been active in exhibiting his work since his retirement several years ago.

Howard holds degrees in Sociology from the Illinois Institute of Technology and the University of Chicago. As a graduate student he started pushing the capabilities of computer software applications.

Although he transitioned from film to digital image capture about seven-years ago, he had been digitizing his film for years before that. Digital image editing to create art is a continuation of his software expertise and is very much a part of what he creates.

Howard is an artist member of Imago Gallery/Imago Foundation for the Arts, the Rhode Island Center for Photographic Arts, the Newport Art Museum, the Newport Photographers Guild, Art Night Bristol-Warren, the Wickford Art Association, the Bristol Art Museum, and the Attleboro Arts Museum.